Recently, Hunt & Hackett did an incident response engagement involving Sodinokibi (also known as REvil) ransomware. During the incident, the adversary installed a ScreenConnect service on several systems, functioning as a backdoor. This gave the adversary the possibility to connect directly to those systems, without the need of using the Remote Desktop Protocol (RDP), or the need to authenticate (this is required of course for installation of ScreenConnect). This is a rather efficient and effective technique used by more threat actors, next to other types of legitimate Remote Administration Tools like TeamViewer and AnyDesk. Other examples of threat actors that have been using ScreenConnect in the past are the Iranian actor named Static Kitten [1] and another targeted ransomware group called Zeppelin [2].

In this blog post, we will look into the traces left behind by the usage of ScreenConnect remote administration software and how these traces can help defenders with building custom detection.

This chapter describes the different traces left by ScreenConnect when it is actively used. Furthermore, some rules are provided in order to detect the usage of ScreenConnect on a system, or in an infrastructure.

ConnectWise Control [3] (formerly known as ScreenConnect) is advertised as a solution that "gives your techs full remote access to remotely control, troubleshoot, and update client devices". It should not come as a surprise that ScreenConnect can thus also be used for malicious purposes.
Via the web interface, ConnectWise Control (among others) offers functionality to remotely:

Additionally, ConnectWise Control allows an operator to take control of a machine's desktop session. During a recent incident response case, the File Transfer functionality was among others used to upload MimiKatz [4] to a compromised system, as well as to upload other tools like Advanced IP Scanner and the actual ransomware.

All events related to ScreenConnect can be found in the Windows event logs and are logged with the provider name 'ScreenConnect Client (<hex string>)'. More specifically in the Application.evtx and System.evtx log files, which can generally be found at the following location:

In Table 2 an overview is given of the different events that are being logged in the Windows event logs, what is being logged, in which log file the event can be found and what the corresponding EventID Is.

When ScreenConnect is being installed, it installs itself as a service. Services that are being installed show up in the Windows event logs and can therefore be detected. More specifically, these events can be found in the 'System' event log and get the Event ID 7045. An example of such an event is shown in Figure 2.

Figure 2 - ScreenConnect being installed as a service Windows event.

2.3 ScreenConnect start and ending of a session 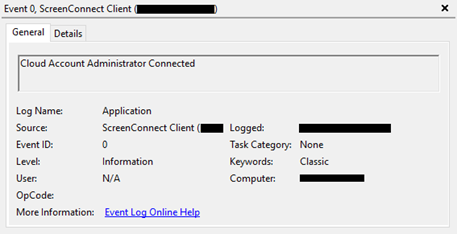 ScreenConnect offers different ways of interacting with the endpoint on which the ScreenConnect agent is installed. File Transferring is one of them. Files can be both send as well as being retrieved from an endpoint as shown in Figure 5.

Another form of interaction with an endpoint is command execution. Via the ConnectWise Control center it's possible to type a command, hit the 'Run Command' button, after which the command Is executed. The commands that are allowed to be used are the commands that are generally supported by the Windows Command Prompt. An example of the interface in ConnectWise Control is shown in Figure 7.

Upon execution of an operator invoked task, a Windows Event is generated that indicates a command of a certain length has been executed, as shown in Figure 8. The type of executed task cannot be derived from the Windows Event Logs. However, manually-executed shell commands are launched from ScreenConnect.ClientService.exe as command (.cmd) scripts, whereas tasks like process listing and termination are executed via Powershell (.ps1) scripts. 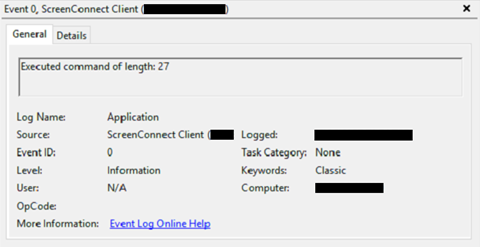 The process of a command task being launched by ScreenConnect.ClientService.exe, the actual execution of the command and the result are outlined in a bit more detail as shown in Table 3.

Table 3 - Execution chain of command via the ConnectWise Control interface.

Installation of and interaction with ScreenConnect can be detected. We have developed Carbon Black and YARA-L rules to support detection efforts. These rules can be found in appendix 1, at the bottom of this page. Furthermore, from a forensics perspective, the fact that ScreenConnect.ClientService.exe writes either the command(s) to a .cmd, or a .ps1 file before executing the command, might make it possible (hasn't been tested yet by Hunt & Hackett) to carve for these files. This potentially shines a bit more light on the actual commands that have been executed by the adversary.

ScreenConnect event logs can indicate that an operator has connected to a machine or performed certain actions like executing commands or transferring files.

At first glance, it might appear that monitoring for ScreenConnect events might be enough to detect malicious usage of ScreenConnect. This is however not something we can always assume. For robust detection we cannot take for granted that all information is always available.

For example, we cannot just rely on the Windows event logs. ScreenConnect events are generated by the application itself, meaning that a determined attacker can prevent any logs from being created. The ScreenConnect client uses the TryWriteInformationToEventLog() function to log certain events.

TryWriteInformationToEventLog() is implemented in the unsigned ScreenConnect.Core.dll module and, below the surface, is merely a wrapper around EventLog.WriteEntry(). If we can modify the application in such a way that EventLog.WriteEntry() is no longer ever executed, we can prevent the generation of event logs.

To demonstrate that we can prevent ScreenConnect from logging events, we can patch the bytecode of ScreenConnect.Core.dll, using a tool like dnSpy [5], and overwrite the call to EventLog.WriteEntry() in TryWriteInformationToEventLog(), as shown in Figure 11. This ensures that ScreenConnect can no longer generate any events and will create less evidence.

For this proof-of-concept, we manually patched out the call to EventLog.WriteEntry(). A determined attacker could of course implement this anti-forensics technique in a different way. 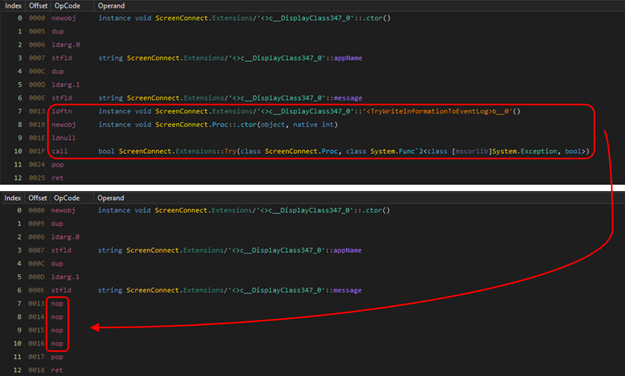 Figure 11 - Patching the write to event log functionality of ScreenConnect.

In case an attacker would use such a modified version of ScreenConnect, we cannot just rely on the Windows event logs. Instead, detection should also focus on the execution of suspicious executables, whether it being ScreenConnect being launched / installed by the attacker or executable files being started via the build-in Run Command functionality.

This appendix contains an overview of different rules in both Carbon Black as well as Yara-L format. Additionally, you can find an already existing Sigma rule in the Sigma rule repository  'SigmaHQ/sigma/rules/windows/process_creation/win_susp_screenconnect_access.yml',  For completeness the Sigma rules is listed in this appendix as well.